After the previous lengthy post (and the time it represents) the short conclusion was that a paste extruder merely working by pressurizing a syringe full of material in order for the material to extrude is not a reliable method for use in RepRap machines. It's simple, it's straight forward, served us very well but impossible to predict and control the flow rate.

The next episode of chronological brain dumping, an auger valve extruder prototyped and tested in the first halve of 2011.

Convinced that one doesn't need to reinvent the wheel, I started to search for industrial areas and applications where they have similar needs: precise extrusion of paste materials. The field I found the most closely related is the fluid dispensing technology used for the precise deposition of dots or lines of sealant, adhesive, silicone, epoxy, glue, resin, soldering paste etc.

The basic setup of most fluid dispensing implementations looks like this: 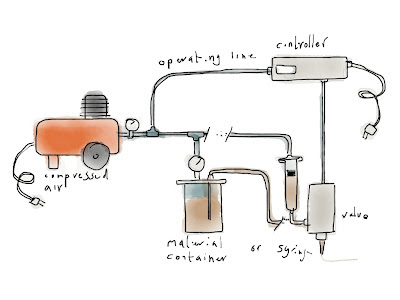 There is a material reservoir which holds the material under the necessary conditions (stirring, heating etc). Next there is the feeding system, to transport material from reservoir to dispensing, for low viscosity material this can be gravity feed but higher viscosities need a pressurized syringe or large pressurized container. High viscosity material feeding can be done by using a feed pump (not in drawing). Right before the nozzle is a device called the dispensing valve.

Lets skip the first two for now and jump straight to the dispensing valves, the operating end of this system. I was immediately drawn to them because they sure look like badass extruders! 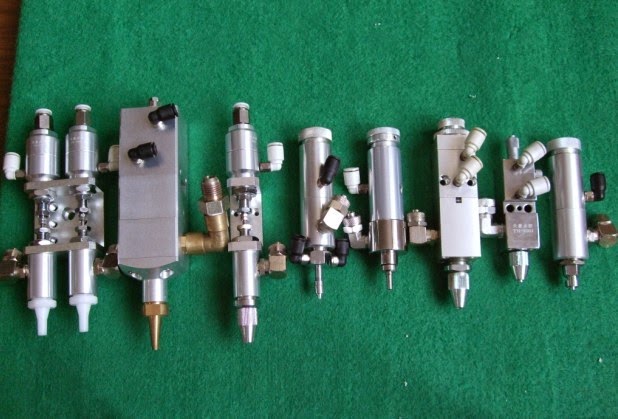 There is a whole range of valves used in these industrial applications. After researching many suppliers websites and catalogs (with often confusing and contradicting use of terminology), it becomes clear that they fall into only a few categories and most of these devices are, as their name implies, simply valves.

As a non native speaker I had to remind myself what a exactly a valve is, its like a faucet in your kitchen. A device that can switch a flow of material on and off. Nothing more but also nothing less. 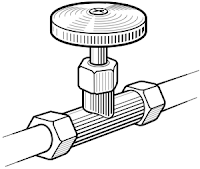 Valve
a device for controlling the passage of fluid through a pipe or duct.


In this basic valve category we can find fine apparatuses like the Poppet, Needle, Diaphragm, Spool and Pinch Tube valve. They differ in working principle and therefore are better suited for different applications. The Poppet and Spool valve seem the most suitable for high viscosity paste materials, even abrasive and filled pastes (what clay is). They are all operated by air pressure and follow digital logic, open or closed. One can regulate these valves only with set screws which increase or decrease the diameter but this is a fixed setting, not something you control during operation. So it boils down again to two other 'controlling' parameters, time of opening and feed pressure and we know those two from the last episode. This types of valves would make a nice addition to the previously discussed pressurized syringe systems by switching the on/off action to the nozzle side of your system instead of pushing the whole body of material. Think (in faucet analogy) of the pressurized syringe time/pressure system as trying to control your kitchen faucet water flow all the way up at the water tower... No, it makes sense to add the faucet or valve right where you need it, just like a water tower, a syringe is constantly pressurized and will only feed material when there is a demand.

But I was not interested in these 'valves' because while a nice potential improvement for the starting and stopping of your extrusion, there is still no way to predict and control the flow rate. We still have to visually verify how much material is extruded through the nozzle at any given moment or use complicated flow meters and regulating gear.

(To be complete, in many industrial applications previous episode's simple time/pressue syringe is used but I would rather not even call that a valve, and we dismissed this principle for an extruder in that episode)

So first conclusion is that what we're after is not a valve so much but a pump.

There are various other speciality valves that I will look at in later posts like Peristaltic or Progressive Cavity valves. But there was one type at this point in time (feb. 2011) when initially researching industrial dispensing valves that was very different from the simple valves and immediately caught my eye: the Auger Valve. Some promo snippets:

"The valve uses a feed screw (auger) to dispense fluid with a rotary displacement action, allowing ultra-precise control of the dispensing process."

"With a feed screw made of Delrin®, the valve is designed for use with two-compound and abrasive materials."

These quotes gathered from the various vendors of auger valves sounded like a sales pitch aimed straight at me:

Auger valves works like this: The material is fed from a continuously pressurized syringe or external reservoir into the top of the valve. The valve consists of an auger screw fitting perfectly in a cylindrical housing which at the bottom ends in the nozzle. The pressure on the syringe is just enough to feed the material in the valve where it will hit the auger and stops there because of the increased friction caused by the narrower size of the fluid path along the screw thread and ultimately at the even narrower nozzle end. The screw is actuated by a motor and this rotation forces the material down the screw thread out of the nozzle. The flow rate is controlled by the RPM of the motor.

These things are rather expensive (upwards from 2500$) but when you look at them, they consist of a DC motor with optional gears/encoder and on the other end the screw housing with fluid inlet, nozzle end and the screw. If we substitute the motor end with 'standard' RepRap Nema steppers then what we need is only the screw assembly, the extruder's 'business end'. Thats why my attention was immediately drawn to Techcon's TS5000DMP because it has a 'Disposable Material Path' hence the DMP in the name. The DMP is the whole screw assembly in small and affordable delrin plastic package. The cheapest that I have found is around 25€ at dosieren.de (and up to 125€ for the exact same bit, industrial premium prices...).

Ordered a couple of the medium 8pitch DMP's and designed a very simple extruder head that mounts on the bfb Rapman for doing the experiments. The extruder is basically two halves that hold the DMP and both bolt together on a stepper with the extruder carriage plate in-between. An new carriage plate was needed because both the syringe and the extruder had to pass through. Its not designed for easy replacement of the DMP, was just to get the job done. The files can be found on Thingiverse: thing:28018

The first tests with clay were fantastic, this was exactly what we needed. It behaved very much like your standard plastic filament extruder. Turning the stepper on resulted (after priming) in an immediate flow of clay proportional to the speed. So you could easily speed up and down the flow of the clay. Stopping the stepper resulted in an immediate flow stop and no material passed the auger form the continuously pressurized syringe, when that pressure was set just high enough to feed the clay in the auger. We did some initial test with clay, chocolate and potato mash and those looked all promising. The following movie was shot using my original iPhone so looks a bit crap but you get an idea how it prints. This test object has three separate single wall shapes to test the on/off capabilities.

But after some further extensive testing with porcelain clay the system became less and less reliable and odd symptoms started to occur: flow rate became unreliable during a print and adjustment was needed, material leaked past the auger when the motor was not turning. Closer inspection of the auger confirmed a suspicion, that the delrin plastic augers were being grinded down by the ceramic material. The auger showed already degradation after a couple of minutes, therefore the auger was less capable at transporting the clay and increasingly the air pressure started feeding the material instead of the degraded screw thread. Vieweg (dosieren.de) conveniently also sells stainless steel augers for use in the DMP, they come at a more hefty 125€ a piece. After installing one of these augers another problem arose, the steel auger and the abrasive clay were eating away the housing. The problem being that it is rather difficult to get the auger to perfectly align with the housing so when it sits at the slightest angle it will grind the housing. I have printed a couple of extruder heads and made adjustments to about every part between stepper and DMP so that the auger would nicely sit in the housing but that proved very hard with RepRapped plastic parts. Maybe one of the reasons that original auger valve was 2500€, precision engineered... I also found complete stainless and even ceramic augers + housings but they were not of the 'disposable' category and cost 600€ and up.


So the promising DMP part is not really up the task, I also had the feeling that it was underdimensioned for the purpose of extruding continuous and with a rather large flow rate. The stepper was turning at 100-200RPM to get to the speeds needed. But its not because this DMP bit is not up to the task that the whole auger principle is down the drain for our purpose is it?

Imagining that the rapid wear and tear problem would be solvable than there was another observation that was against what we need in a reliable predictable paste extruder. I did a couple of tests to see what happens when you changed the air pressure on the syringe that feeds the material into the auger and, obviously, below a certain point the pressure would drop too low to feed the auger but above that point the output of a fixed speed turning auger would vary in relation to the input pressure. Definitely not as much as when you would use a direct air 'frostruder' system but still more than enough. So that means that after all a change in material viscosity would still result in a changing flow rate at the nozzle and there would be no way to say that at a certain RPM you would get the right width of your extruded line, you would still need to fiddle with the air pressure. DAMN.

I know some people tried building auger valves using drill bits like these guys from Bauhaus University Weimar: GMU:RAPMAN/CLAYSTRUDER Before writing this post I checked if they got any further success with this system but unfortunately not.

While revisiting all my notes bookmarks on the topic I stumbled upon the following pdf: Archimedes Pumps. This is by far the best technical (but very readable) description of how an auger valve works, its operating principles and strong and weak points. In two different paragraphs the relation between viscosity and flow rate (in a previous post I described the relation between viscosity and air pressure, a small change in material viscosity means a change in flow rate under a constant pressure).

So the auger pump is not a true positive displacement pump (sometimes referred to as a metering pump) and the conclusion is that that is what we're after!

Next episode: Positive displacement pumps aka "constant flow machines" (I like that, sounds good)

ps. If there is anyone (or you know someone) with day job experience in the dispensing industry please chime in with your thoughts on these observations.

Some extra links and references:

Unfold ~fab is Belgian Design Studio Unfold's Reprap and Personal Fabrication Blog, where we detail the progress of various projects. At the moment this focusses on ceramic 3d printing.
For our regular website visit unfold.be

support us, buy our book: